Skip to Content
By continuing to use this site, you agree to the use of cookies. Find out more
Home about columnists Sally Jones - The Hog Hotel “To me, there is no great chef without a great team.”

It has been a full on six weeks since the end of the summer season as #teamhog have gone full steam ahead to fully recruit a strong and capable team, ready to hit the off-peak season. If there is anything that the last 18 months has taught, is it that having the right team around us to grow is paramount. A summer of staff shortages across not only our industry, but also those that supply it, has made the Great British Staycation far more difficult than it should have been. Staff we furloughed throughout, and topped up pay, and kept on the books rather than make redundant in hope of their loyalty upon reopening dropped like flies over the summer as customers returned. Feet got sorer, and shifts got longer…

However, there is always a Plan B; and a C, and a D… No one is irreplaceable, and in fact we have taken the decision to recruit a team both front and back of house who we will spend the next six months training, developing, and nurturing, even though this may cost us financially over the quieter months. To be able to kick off next year’s peak season with a well-established group of enthusiastic staff is our dream. Supporting our own talent is paramount in a market where chefs are so scarce that many are being overpromoted without the relevant qualifications, and then failing. Fortunately, in our kitchen Chef Terry Balme is mentoring our two fantastic commis chefs Kieran and Archie, and we have high hopes for them both. As well as on the job learning, they are attending college on apprenticeship schemes, and Terry is putting some fun into some education outside the kitchen. He knows he can’t be a great chef all by himself.

Over the last couple of weeks our cute little Hog Mobile has been beetling around Suffolk with the eager chefs hunched up in the back, learning more about what our region has to offer. We are so fortunate that our area is rich in amazing producers – and no, for those who asking we are not panicking about shortages at Christmas. Although, through the hospitality grapevine, we do hear of competitor’s freezers already stuffed to the rafters with turkey, chicken and sausages! Ours just has home-made sorbet.

As well as touching base with some of our meat, fish and vegetable producers, Terry has been showing the team some fabulous ingredients to forage just a stone’s throw from the hotel. Marsh samphire a plenty in Southwold, plus sea beet and sea purslane. Mushrooms are fabulous at this time of year, and a local farmer has given us partridges to pluck and make into terrines. Terry is also in talks with keen local veg growers at the allotment – perhaps we are starting our own circular economy.

If people keep panic buying who knows, it may very well be a partridge in a pear tree for Christmas. Although we very much think not. 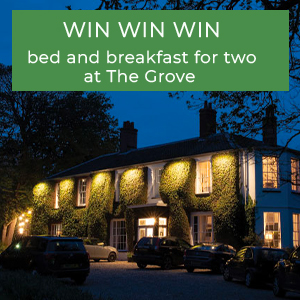